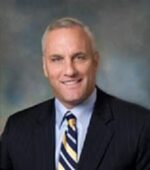 Attorney Christopher A. Kenney, a founding partner at Kenney & Sams, PC, and a former partner in the Sherin and Lodgen Litigation Department, has extensive experience in the litigation of tort and contract claims, including all types of business disputes, employment law, construction, and real estate disputes. He has successfully represented both plaintiffs and defendants at trial before every level of the state and federal trial court system in Massachusetts. He also has substantial expertise as an appellate advocate.

Mr. Kenney was awarded an “AV” rating by the Martindale Hubbell National Law Directory, its highest rating for legal ability and professional ethics. In addition, Boston Magazine ranked Chris as one of the top 100 Lawyers in Massachusetts. He was also named a “Superlawyer” in the areas of business litigation and civil litigation defense.

Attorney Kenney was appointed to serve as a Special Assistant Attorney General, from 1999 to 2005, representing the Commonwealth in litigation matters involving construction defect claims, constitutional law and eminent domain matters.

In addition to his active litigation practice, Chris has served as adjunct faculty at Boston University School of Law. He also frequently writes and lectures for business groups, trade associations and bar associations. He is also a formally trained mediator.

Mr. Kenney received his Bachelors Degree from Holy Cross, where he received an NCAA scholarship. He earned his law degree in 1990 from Boston University School of Law, where he was named a Paul J. Liacos scholar.