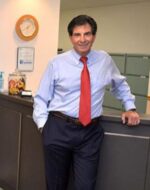 Born in Middletown, Connecticut, Attorney Paul Morello, Jr., has been a lifelong resident of the area. After attending undergraduate studies at Holy Cross in Worcester, MA and law school at the Albany Law School at Union University in New York, he returned to Connecticut and was admitted to the Connecticut Bar and the Federal District Court for the District of Connecticut.

For many years, he worked as a defense attorney for a number of insurance companies. His current practice at Donovan and Morello is primarily plaintiff side personal injury work.

Paul has served as an arbitrator and small claims magistrate for the Connecticut Superior court. He has also served as a private neutral for over twenty years.

Attorney Morello is the co-author of “The Handbook of Connecticut Uninsured/Underinsured Motorist Law”, along with several other published works on motor torts.