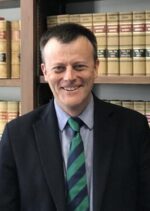 Attorney T. R. Rowe has been practicing law in state of Connecticut since 1995. His diverse legal background has given him a well-rounded perspective to analyze and resolve cases.

During his years practicing law, T.R. has served as a state representative in the Connecticut General Assembly and a councilman for the Town of Trumbull. In 2013, he was elected as Probate Judge for the districts of Easton, Trumbull & Monroe, where he still serves to date.

At McNamara & Kenney, his practice concentrates on ADR work along with a mix of Insurance Defense and Plaintiff Personal Injury cases (about 70% defense and the remaining plaintiff’s and probate work).

Attorney Rowe has also received many awards and serves in many civic organizations. He was awarded the Exemplary Legislative Leadership & Service Award, from the National Elder Law Attorneys Connecticut Chapter in 2010 and was voted Legislator of the Year in 2006 by the State Association of Police Chiefs. He currently serves as a Director of the John & Ethel Kashulon Foundation, a Trustee of the Saints Cyril and Methodius Church and also sits on the Honorary Board of Directors for the Caroline House for the Women’s Literacy Outreach Program.